A Fashion for Spice

It is still hard to fathom that the fashion for spice-infused recipes and medical remedies of a few, privileged aristocrats in premodern Europe transformed the world—sent Columbus to America and forged colonial links between Asia and Europe.  Empires 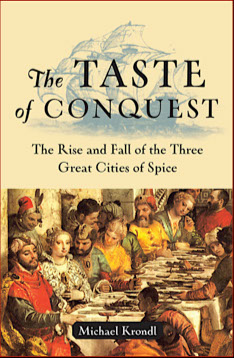 were won and lost on trading spices.   European expansion and its eventual conquest of the greater part of the world was set in motion by little more than an elite desire for these little aromatic berries and pods.  Globalization set sail on spice-scented galleys and sailing ships.

Other foods, mainly salt and grain, were widely traded in the premodern world, but they were essential for survival.  Spices are not. And it is precisely their inessentiality that makes them a useful lens for examining the human relationship to food.  Once people no longer fear starvation, they choose foods for a whole variety of reasons and these were not so different at the court of the Medici than they are at the food courts of Beverly Hills.

The Taste of Conquest tells the story of the legendary players in this global tale:  of the ruthless merchants of Venice, of the conquistadors of Lisbon, and the single-minded businessmen of Amsterdam.  It’s a story about food, greed, fashion and conquest.  I think it’s a good read and of course I want you to buy a copy.

But there is more to the subject than could ever fit in one book, so here is a website that

begins to fill in the gaps with graphs, charts, recipes and, most importantly, plenty of links for anyone genuinely interested in the matter.  If you can contribute anything to the website, add a link, or correct any mistakes I would be duly grateful.  Also, for any scholars interested in the subject who are frustrated by the lack of footnotes in my book, please contact me with specific queries.  I have a virtual, footnoted version of the text and would be happy help out any scholar in need.